beyond the trend: the culinary powers of coconut oil

In the Marley Spoon test kitchen we’re often drizzling olive oil left and right: we love the fragrant, peppery flavor of a good olive oil, and often it’s all you need to finish a salad, soup or pasta dish. But lately we’ve been wild about coconut oil.

You may have heard, there are dozens of ways to use coconut oil outside of the kitchen. Lathered onto dry skin to moisturize or as an ingredient in natural deodorant and toothpaste, the list is (almost) endless. But we’re interested in its culinary powers. How do we use it in the kitchen? Why do we like it so much?

We asked Chef Dawn Perry from our culinary team how to sneak coconut oil into our everyday cooking. There are two kinds of coconut oils you should keep an eye out for: extra-virgin coconut oil and refined, expeller-pressed (nonhydrogenated) coconut oil.

We love refined expeller-pressed coconut oil for a higher smoke point. To sauté veggies and crisp rice, to sear chicken at high heat for a golden-brown bubbling skin, to fry Thai curry paste before adding coconut milk. In all cases, it performs excellently so you’ll no longer have to worry about burning your oil (goodbye oxidized black-speckled olive oil!) next time you’re sizzling over a high flame. Our favorite combinations? Greens such as bok choy, snow peas, broccoli and okra. Delicate curries. Thick lentil stews. We find that coconut oil is less slick than other fats, and has a lighter mouth-feel than vegetable oil. While refined coconut oil is fairly discreet, you’ll still want to avoid it in certain dishes where it might overpower the other flavors.

So, next time you’re making muffins or a quick bread, try using coconut oil instead of butter or vegetable oil. You’ll get a stunning interior with moist crumbs and a crisp top. And then there’s the addictive, nutty aftertaste, perhaps faintly tropical, but mostly warming, the kind that wants an autumnal spice blend of cloves, cinnamon and nutmeg. 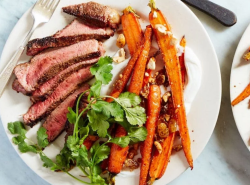